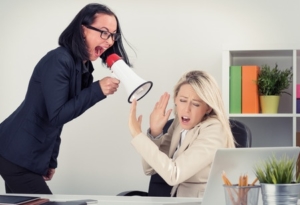 Imagine you had a magic weather wand. A simple wave and you would have glorious sunshine, a gentle breeze with a cloudless blue sky above.

With your magic wand you would lighten people’s moods, you’d lift people’s energy and motivation. In one swoosh, you could banish the grey clouds and make those heavy bands of rain disappear.

Dealing with someone you’re finding difficult at work can feel like a lot of heavy rain. Every conversation is a strain. Team meetings can be a thunderstorm. And everyone gets wet.

Should you talk to them about the need to change their attitude?

Do you sit down and tell them just how disrespectful and rude they can be?

Or could those conversations just bring further gusts of rain and showers?

It’s easy to get pulled into seeing only rain showers when someone is hard to manage. They are moody, unco-operative, hard to approach, resist any kind of feedback, don’t meet work deadlines, upset people around them, rude, unreliable…the list seems endless.

How might you bring some lightness into the heavy weather of a ‘difficult person’ in your work environment?

Become aware of your negative bias

Once we begin to label someone a ‘difficult person’ we are increasingly attuned to seeing only the negative about that person. According to Psychologist Rick Hanson from UC Berkeley evolutionary survival instincts cause negative activity in the environment to be perceived more easily and quickly than positive events. Our brains are drawn more easily and quickly to bad news.

Soon you see only rain and dark clouds any time this person crosses your horizon. And not just when you see them, even thinking about them can send you into a bad mood. Their positive traits have become obscured by the murky skies of irritation or frustration with how they behave.

A conversation with them to talk about changing these behaviours runs the risk of using negative rather than positive language: ‘I don’t like your attitude’ or ‘You’re not a team player’

Research has also shown that use negative of words releases a cocktail of anxiety and irritation-inducing chemicals in the brain– for both the speaker and the listener. The follow-on effect is to undermine the level of trust and co-operation between you and them.

Here are three simple shifts that can act as a magic wand to bring some more lightness into how you raise issues and approach them so you have a more positive and productive impact.

Ask yourself instead what behaviours would you like to see.

What does ‘don’t get on well with mean’?

Flipping from negative to positive you could say instead

When we’re in a negative frame of mind about someone, it’s easy to get into using vague and unclear labels about them. Phrases like ‘negative behaviour’ or ‘bad attitude’ or ‘unreliable’ roll off our tongues.

But think about it… none of these phrases give any clue to a person what specifically they are doing wrong and how they can correct it.

And how can someone be expected to change if they don’t really understand in a concrete and objective way what it is they need to do differently?

Of course your intentions, your tone and body language need to be in sync with a mindset that’s focused on positive and supportive development and change.

Not a laundry list of all their wrongs and faults.

If you’d like to find out more about how to raise difficult behaviour issues with clarity, confidence and ease, download my free eBook ‘POISE NOW 8 Steps to Navigate Winning Conversations for Leaders and Managers’