The Mediation Act, 2017 was passed in September 2017 and is the culmination of a slow but steady increase in the use of mediation to resolve disputes in a variety of contexts. The workplace and employment arena has also seen a growth in the use of mediation compared to more time-consuming adversarial processes such as investigations and litigation, to deal with conflict and complaints.

So is ‘mediation’ the new kid on the block, the panacea for all people problems, the new buzz word to be doing and training in and trying to introduce into an organisation?

There is no doubt that mediation as an intervention has many benefits. Research into workplace mediation shows a high degree of satisfaction from users of the process as well as settlement rates in the 80-90% range. The speed and informality of the intervention minimise the long-term damage to working relationships, in contrast with the lengthier, formal and adversarial nature of investigations.

However, the research is also showing is that parachuting in external mediators in a piecemeal fashion, as a last resort with hard cases, has limited impact. Rather, the focus needs to be on pro-active prevention and management of workplace conflict, where it’s not just about ad hoc mediation interventions but implementing a ‘mediation mindset’ throughout the organisation.

So what do we mean by a ‘mediation mindset’?

A mediation mindset is focused on embedding the understanding of conflict not as something to be avoided or suppressed. Instead, it’s about accepting the inevitability of conflict and taking a strategic approach in managing it. It’s about ensuring that both the skills and responsibility for effectively managing conflict are devolved right throughout the organisation.

ACAS, the UK’s version of the WRC have carried out a number of in-depth studies over the past 5 years into dispute resolution in the workplace and in particular the role of mediation. (See below for further reading and references).

“One of the main findings was that the piecemeal adoption of mediation is not a panacea for workplace conflict. Instead, participants pointed to the need for organisations to adopt more integrated approaches which locate conflict management as a central element of HR strategy”
(Latreille and Saundry, 2015) 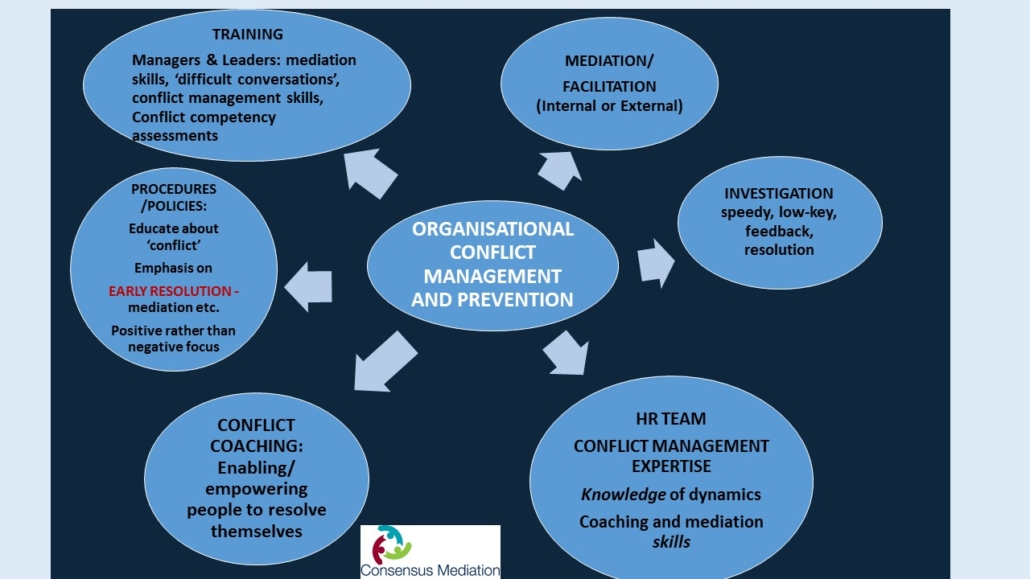 This infographic highlights a smorgasbord of interventions and processes that could underpin a co-ordinated and cohesive strategy to prevent and manage conflict and complaints in organisations.

Organisations need to have a robust mediation policy with clear guidance, expectations and procedures that educate employees about conflict management and emphasise the benefits of early resolution and options such as mediation.
Dignity at Work policies in most organisations make no more than a passing reference to the need for mediation. In contrast, the Civil and Public Service Dignity at Work Policy which was reviewed in 2015, has a strong emphasis on mediation. For example:

One of the key barriers identified across all of the ACAS research was resistance from line managers to implementing soft skill approaches such as mediation and/or having difficult dialogues. This stemmed to a large extent from lack of confidence as well as skills/know-how in handling difficult conversations and/or mediating informally. Fear that efforts to address performance or behavioural issues might result in a backlash grievance fed into their reluctance to engage with potentially confrontational conversations. There was also a concern that such conversations could lead to grievances or complaints against managers.

The research identified a number of measures that could support managers, whom it identified as key actors in the management of conflict in the organisation. This was seen as a central aspect of the HR strategy and also reflected in the development of key managerial competencies within the organisations surveyed.

Having a pool of trained mediators available in-house makes the process much more accessible and available both in terms of time and cost. Saundry and Wibberley (2015) found that introducing in-house could have a “transformative effect on workplace relationships and critically lay the platform for channels of communication which facilitate the early and informal resolution of workplace conflict.”
They cited the example where in one organisation this mediation training had helped to rebuild relationship between managers and trade union representatives such that “an adversarial approach to disciplinary and grievance issues was replaced by one in which the parties sought to resolve issues at the earliest possible stage through informal discussion and negotiation” (Saundry and Wibberley, 2015).

While the role of operational managers in handling conflict constructively is critical, the research also pointed to the continued need for HR to strategically co-ordinate and foster the development of a resolution culture. This means on-site, hands-on support (rather than devolution of all HR to remote shared services) as well as adequate training – in mediation skills, conflict coaching as well as having a good theoretical knowledge base around the dynamics of organisational conflict competence.

Clearly greater attention and use of formal mediation in the workplace is to be welcomed. However, it is likely to be much more effective and impactful in the context of an organisational ‘mediation mindset’. In the words of Saundry and Wibberley, 2012:

Towards a system of conflict management? An evaluation of the impact of workplace mediation

Conflict and Resolving Individual  Employment Disputes in the Contemporary Workplace

*This role is not the same as the ‘Contact Person’ whom parties to a complaint may contact and who will provide listening support and explain the resolution options but not in any way intervene or advise people what to do.

Want to take some formal training in applying the Mediation Process and Skills: Click here for our Mediation Skills workshops for Managers and HR Managers

Going Around In Circles In A Conversation? Circular Arguing And How To Break...
Scroll to top